This is one of the best examples both of the use of cultural campaigning during this period, and of the collaboration that took place between local, professional, statutory and voluntary groups.

During the campaigning of the eighties, representatives of both the Joint Docklands Action Group (JDAG) and Docklands Community Poster Project (DCPP) would attend the different meetings of the federated tenant and action groups around the Docklands area, as well as inviting representatives to their own meetings. A comment was made at one such event, that it was time to take another petition to parliament to challenge the imposition of the government appointed Docklands Development Corporation, which had effectively removed powers from the democratically elected local authorities. 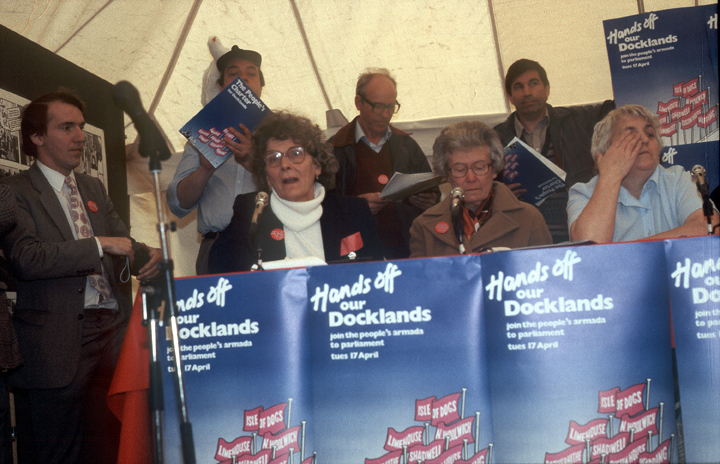 Another delegate pointed out that since both Docklands and parliament were both situated the river, that made it a potential route for delivery of the petition. Someone else spoke up to say that he was a lighterman in Wapping, and owned a barge – perhaps a appropriate means of transport for this journey? There was a further proposal that this barge could be decorated. The idea was taken up by JDAG and taken around the meetings of other Dockland groups, and in this way grew from a petition to a major event. People wanted to go from each Docklands location, so the hiring of pleasure cruisers was planned. These could also be decorated. And what would all these people do when they arrived at parliament? The Greater London Council (GLC) were approached. They provided funding for the event, plus use of Jubilee Gardens close to the pier opposite parliament where the pleasure boats could discharge their passengers.

Jean Lowe from JDAG together with Stewart Luck of the North Southwark Community Development Group undertook the organisation, while the DCPP co-ordinated East London arts groups and provided imagery, design and publicity. The main barge was decorated with a 24’ x 12’ banner with an image that was to become the emblem of the community fight back. This was a dragon in the shape of the river as it runs through Docklands, the dragon of myth and legend, a force of the underworld, and the power of repressed emotion. The symbol caught the imagination of local groups and a wealth of ephemera was generated – T shirts, mugs, letter headings, badges, balloons, posters and more banners. 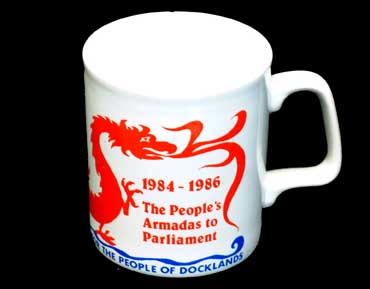 The Basement Arts Workshop printed local area banners for the barge and pleasure boats. However first the barge had to be prepared. This was co-ordinated by Graham Downes of Cultural Partnerships, who worked with a host of young people to paint the barge, hoist the banners, ensure their safety on the voyage and provide tannoy and music. A thousand people took to the river. They sailed to parliament broadcasting their message and heralded by music and songs. It was a moving moment to hear the Armada’s progression up river, cheered on by crowds identifiable by their banners and balloons in the blue and red that had come to symbolise the Docklands fight back. At Jubilee Gardens more music, dancing and banners welcomed those who disembarked at an event that combined arts festival with political rally.

Ken Livingstone welcomed all, and members of the Labour shadow cabinet were asked to address how they would address the issues affecting the people of Docklands from day one of coming to power. Each politician was presented with a copy of the People’s Charter for Docklands, reminding them of their pledge.

This was not the end. There were three People’s Armadas to Parliament between the years of 1984 and 1986. Poems and songs were written about the issues and at a later Armada, Cultural Partnership co-ordinated an enormous barge of musicians, whose contributions filled the air on both sides of the river. They were also pyrotechnics experts, and at another Armada the flotilla of boats circled at North Woolwich by the LDDC offices to the sound of cannon fire. These were events that brought lumps to the throat and tears to the eye. Thousands of people, old and young, who would not have otherwise taken part in political campaigning, took part in this, then continued in an unprecedented involvement. The politicians continued to speak in support of the Docklands communities. Miners leading the strike of 1984/5 held meetings with the Docklands groups, and launched a campaign entitled ‘Don’t let the Mines go the same way as the Docks’. They were so impressed with the Docklands dragon, that they created their own ‘pit dragon’ as a massive carnival costume worn by young people, and attended the Armada celebrations.

Though events such as this could not on their own enable the major shift in political focus that only a change in government would bring, much was achieved on the way. The Armadas also marked a shift from activism to pro-activism in the Docklands political campaigning that became a hallmark of this time, and would be further developed through such campaigns as the People’s Plan for the Royal Docks. They also marked a moment for the artists where their cultural interventions had moved from the margins to the centre of the agenda of resistance. 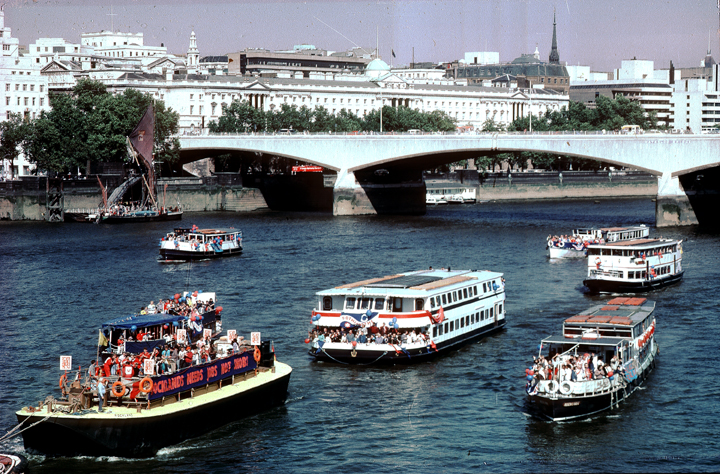